Ok, neither parts of that title are entirely true, HOWEVER, this blog is moving to a new location.

I’ve appreciated the use of this site but can’t afford to pay for the functions that I’d like so it’s time for a change.

Clark Aldrich is one of the best writers around on the use of simulations/games in education – I picked up two of his books over the break and am looking forward to diving into them soon.

He keeps a great blog which is organised into useful, practical sections focussing on different areas of simulation design and development.

His most recent post is particularly relevant to some work I’m doing at the moment with the Nursing folk here – it’s a list of 15 questions for subject matter experts.

These are the first three:

Screenshots of a room I created in around an hour in Just Leap In – visit it at http://www.justleapin.com/shares/9299:7CWxWoP4

It’s as close as I’ve been able to get to a hospital ward with the available furniture and objects. The ability to import your own models is on the list of features to come.

The boxes in the top image appear as the room is loading – rather cute really.

It’s in Beta at the moment and I haven’t taken a huge look around but it is incredibly easy to use and the list of features to come is really impressive. I’ve been in touch with the developers and they seem very switched on and friendly.

I’ll post more about it when I’ve had a chance to play more.

I’ve also been able to embed the world in my other blog (edublogs is a little paranoid about embeddable content) – check it out at http://couchmedia.blogspot.com/2008/12/just-leap-in-diy-virtual-space.html 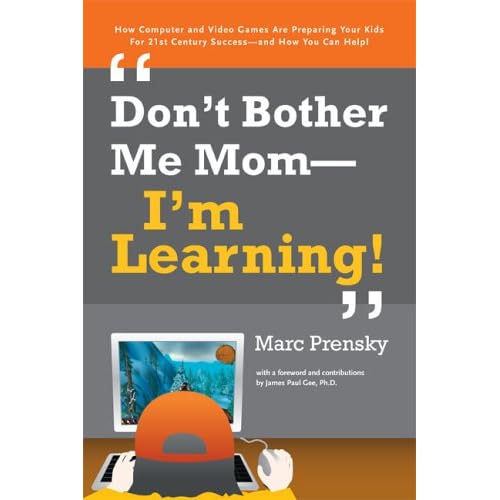 Marc Prensky is a significant figure in the games in learning field, with a substantial body of writing and consultant work behind him. He is a big advocate of using the concept of digital learners and digital immigrants to describe the changes that the information age is bringing and the need to reshape education to keep up with it.

His 2006 book, “Don’t bother me Mom – I’m learning” presents a series of well-thought out and accessible arguments for the benefits of computer and video games. It is aimed largely at non-gamer parents and seeks to counter some of the moral panic foofarah put forward in the media.

I had hoped for something focussed more on education, specifically relating to practical tips for game design and use in the classroom. There is some of this but ultimately the target of the book is parents and non-gamers.

This said, there are a number of worthwhile ideas in this book.

As I say, it’s more of an introduction/cheerleading session for games in general but this book offers a wealth of ideas and evidence for using games in an educational setting.

After a fairly intense year at work and study, it was great to have a chance to wind down a little in sunny Brisbane for the Australasian Conference on Interactive Entertainment.

I’m not altogether sure what I was expecting – the program covered a broad spread of content from A.I, the use of space, mobile games, online media performance, robotics, storytelling and games-based education.

While the majority of presentations were a little too academic for my taste (heavily technical and narrowly focussed), there was more than enough interesting and useful content to make the trip worthwhile.

At this juncture I have to issue an impassioned plea to academics making presentations about funky projects – show us the project/demo/game first and then bang on and on about the rationale, existing literature, underpinning conceptual frameworks and what not. This is most important when the project is something that is hard to understand without experiencing it. I promise I won’t leave once I’ve seen the goodies.

The attendees were a great bunch of people – a mixture of academics (primarily people undertaking doctorates in some gaming related field of I.T or another), game-design lecturers and QUT game-design students. After the initial “forming” period, it was surprisingly easy to have a chat to pretty well anyone.  After the tenth time of being asked whether/what I was presenting, I realised that the point of these things really is to share information (not that I have a lot of first hand knowledge to share just yet) and I was taking on something of a passenger role. Maybe next time around.

There were a few things that I will follow up on – I’ll go into more detail about them in upcoming posts but I will mention one right now.

Thanks to the conference organisers (Ruth Christie in particular) for putting on a great event and also to the presenters and fellow attendees. With luck, I’ll be back.

Well, after a fairly lengthy spell (hopefully) finishing off my Masters in Education (I.T in Education), I’m back.

I submitted my final assignment on Friday and now I just have to sit on the edge of my seat for a few weeks while “they” decide whether I’m worthy or not of the title. (Please, please God let it be so – Introduction to Research Methodology must have been invented by someone who really really hates students)

Anyways, as a dipping the toe back in the water kind of exercise, I’m just going to post a listing I put together a little while ago of all of the model packs, buildings, segments, characters and weapons available in the official First Person Shooter Creator (FPSC) model packs.

I have said a thing or two about this software previously (and it may well be that it turns out that you’re better off just using one of the many, freely available level editors that come with games these days) but in essence, it provides you with the drag and drop tools that you need to build a first person perspective 3d game.

My hope is to soon build something with an educational application. The Game Creators, the company behind this software, also produce a more complicated (and presumably more powerful) version called DarkBasic. (But one step at a time)

Anyways, if you’re interested, you can find a pdf file listing all the models provided up on Google Docs. (there is also a large user community who make a lot more). I mostly put it together to help me get a sense of what is in the game, to help with a possible game design.

Sketchup is an easy to use 3D modelling tool now owned by Google. I first tried it out a couple of years back and then, not having any reason to use it, put it away in a dark virtual cupboard.

I needed to create a model today though so I reached deep into the back of the cupboard and was able to whip this up in a couple of hours (in between meetings and reacquainting myself with elements of how it works).

There is also a nifty third party plugin with the imaginative name of Sketchup Web Exporter that enables you to display your models in a web browser – you can actually click and drag on this object to rotate it.